As you’ve probably ascertained from our coverage this year, Monterey’s Car Week doesn’t begin with The Quail and end with the Pebble Beach Concours d’Elegance. There is an incredible number of satellite shows to keep enthusiasts of all types entertained, most focusing on a specific marque, country of origin, or era. Among other events, we crashed the 2017 Werks Reunion—one of the largest Porsche shows in the country—which occurs during the Car Week festivities. Here are our seven favorite cars from Monterey’s Porsche-palooza.

As soon as we saw the Jägermeister 934, we knew there couldn’t be anything else at the top of this list. Porsche’s had quite a few liveries over the years, but none can grab attention like the eye-searing orange on this most famous 934.

The 934 is often seen as a stopgap between the earlier naturally aspirated RSRs and the later 935s, having the turbo power of the later cars with the body lines and aggressive fender flares of the previous RSRs.

Going beyond the livery, the Jägermeister 934 sports an impressive racing history, including podium finishes at the Nürburgring and Watkins Glen and with respectable finishes at other famed tracks such as Silverstone. 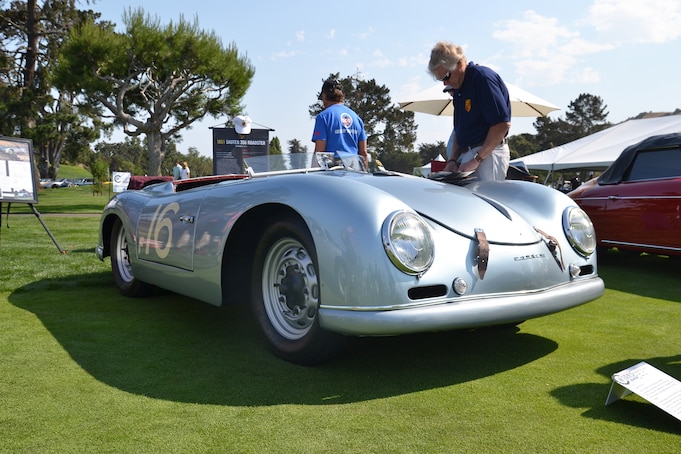 Depending on who you ask, this low-slung silver two-seater is the first Porsche roadster to compete in motorsports, a privately funded affair that inspired the automaker to create a whole lineage of crop-top competition cars.

The name comes from Heinrich Sauter, a former fighter pilot and German businessman who apparently found even the featherweight 356 too heavy for serious competition. He enlisted the help of racer Hans Klenk to drape a 356 in a lightweight steel roadster body, giving it the requisite weight advantage.

The so-called Sauter Porsche didn’t see much success at first and was returned to Porsche, where it was fitted with a more powerful, race-ready prototype engine that carried the car to six class wins.

Following that success, Porsche took inspiration from that low-cut convertible to create the rare 356 America Roadster that peppered competition fields for many years. 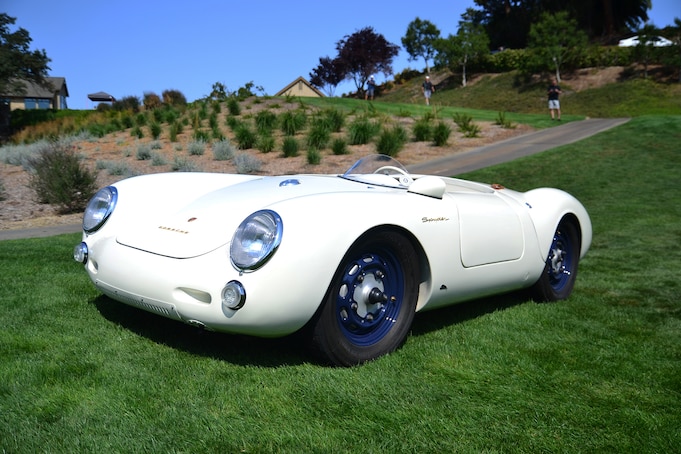 Speaking of competition Porsche roadsters, this gorgeous white 550 was parked by itself nearby a massive field of 996s and 997s. After a closer look, we learned this is a highly detailed replica from 502 Motorworks, making it a much cheaper and less stress-inducing way to enjoy the 550 experience.

It’s a tidy car, especially with the handsome dark-blue wheels. Inside, a sign indicates 502’s work is so high caliber the car is certified by the FIA for use in various series. 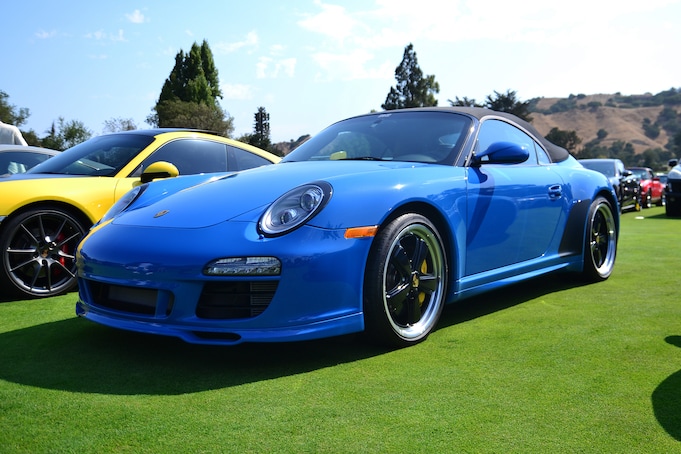 Now, a modern take on the Porsche Speedster. Picking up where the 964 left off more than a decade before, the 997 Speedster was part of a send-off package for the popular 997 family that included the RS 4.0, GT2 RS, and Sport Classic, models that arrived within a year of each other.

In comparison to the more hardcore GT products, the Speedster served as an exclusive model that had every single box ticked and then some. Power came from a GTS-spec 3.8-liter naturally aspirated flat-six, putting down 408 hp to the rear wheels through the seven-speed dual-clutch PDK transmission.

Just 356 of these were made and have seen their original purchase price of close to $200,000 double in recent years thanks to the insane Porsche marketplace. 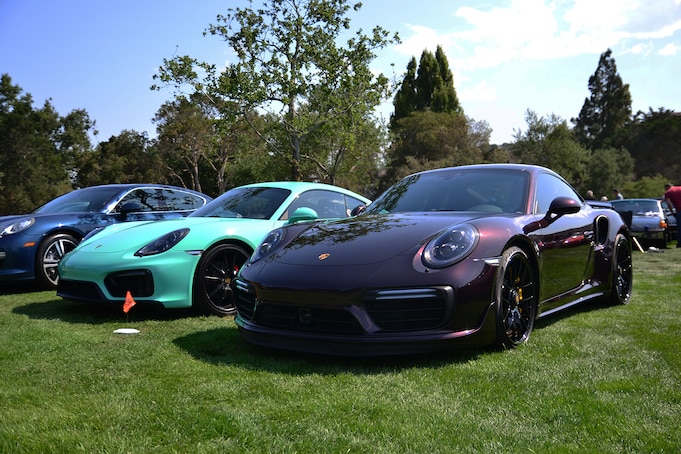 A Pair of Paint-to-Sample Lookers

Sure, a large number of Porsche owners order their newest toy off the rack, but Porsche’s made quite a name for itself regarding custom, special-order paint colors. The Werks field was full of color, but this dark purple 991 Turbo and aquamarine 981 Cayman stood out. 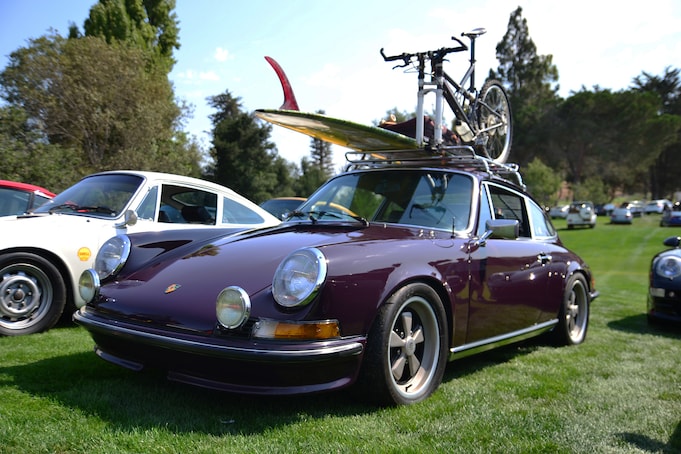 An Outlaw Ready for Adventure

Unsurprisingly, the rows and rows of 996- and 997-generation 911s outnumbered the earlier cars, but there was still a decent pool to pull from. This tastefully modified early 1970s 911 was our favorite from the old-timer group, advertising just how usable these classics can be if you have the patience and enthusiasm with a surfboard, mountain bike, and skateboard mounted on the sweet roof rack. 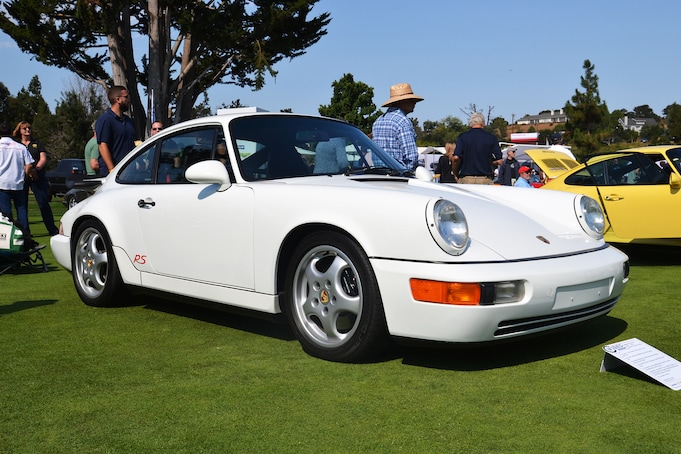 Us Yanks get just as hot and bothered over new GT3 and GT2 products from Stuttgart as the rest of the world, but for a brief moment in the early 1990s it seems Porsche didn’t think so. While the rest of the world was busy enjoying the very hardcore and lightweight 964 Carrera RS, top brass at Porsche North America deemed the Carrera RS too track focused and harsh for delicate American sensibilities.

Thankfully, they came to their senses and offered spurned fans a middle ground in the form of the 964 RS America. Compared to the Carrera RS, it wasn’t nearly as sharp, but it offered a noticeable boost over the regular Carrera 2, despite sharing the engine, brakes, and transmission of the base car. Each RS America arrived with a sport suspension, lightweight door panels, A/C delete, radio delete, and a rear parcel shelf in place of the rear seats. Weight was down 77 pounds compared to the regular C2, but that loss is paltry when compared to the 345 pounds lost in the Carrera RS.

5 Illegal Car Modification That Can Land You In Trouble