Whether you are buying a new or used car, there are some car features that you need to make sure your car has. There are loads of upgrades and new features since the last time you bought a car, and  they can turn a long road trip from a grueling trip to a refreshing journey.

From technology features that simplify using navigation, playing music and even saving you from traffic or a ticket to convenience and safety features that will keep you safer on the road by giving you super powers behind the steering wheel.

You don’t need to buy a high-end luxury car to get these must have car features on your ride. You can find many of them on cars made within the last three to five years. We’re seeing many of these as affordable options on most new cars. We’ve seen these on many cars in the $20,000 to $30,000 range, so you can find some excellent deals on cars with these options.

Here’s out look into why you need these car features. There are some excellent cars, SUVs, crossovers, hatchbacks, and trucks that come with these features. Some cars are starting to add several of these features as standard options on 2017 and 2018 models, but you will need to check out packages and trim levels if you want to get a vehicle with all of these must have features. 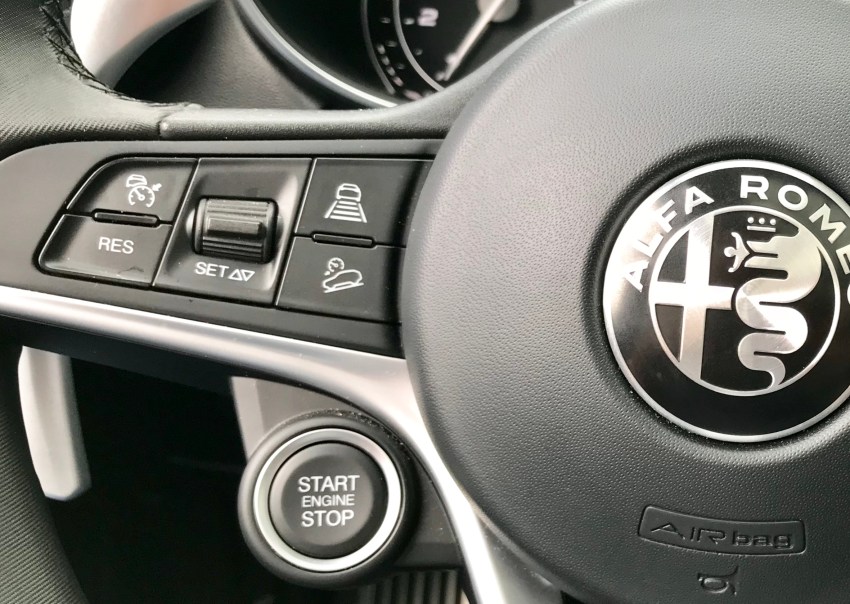 Smart cruise control goes by many different names. You may see it listed as Radar Cruise, Adaptive Cruise or Intelligent Cruise control. Whatever it is called, it will allow you to set your cruise control and then stay with the flow of slower traffic.

Here’s why we love it and why you need it. You get on the highway and set the cruise at 76 miles per hour. You also set the distance you want kept between you and the car in front of you. There are typically three or four settings so you can be close or keep a lot of space. Now you simply steer and your car will go 76 mile per hour when traffic allows it or there is no one in front of you. When someone is in front of you going 73 mph, the car automatically slows down to keep you the distance you choose from that car. This is indispensable in traffic and on long road trips.

Not all smart cruise control systems are the same. Some of work at all speeds, while others only work above a specific limit. Some systems can bring you to a complete stop in traffic and then restart without you needing to touch a pedal.

You can find adaptive cruise control on cars as cheap as $18,500 like the Toyota Corolla, and as an option on many cars below $30,000. Even on pricier cars you may need a higher trim level or special package to get this feature. 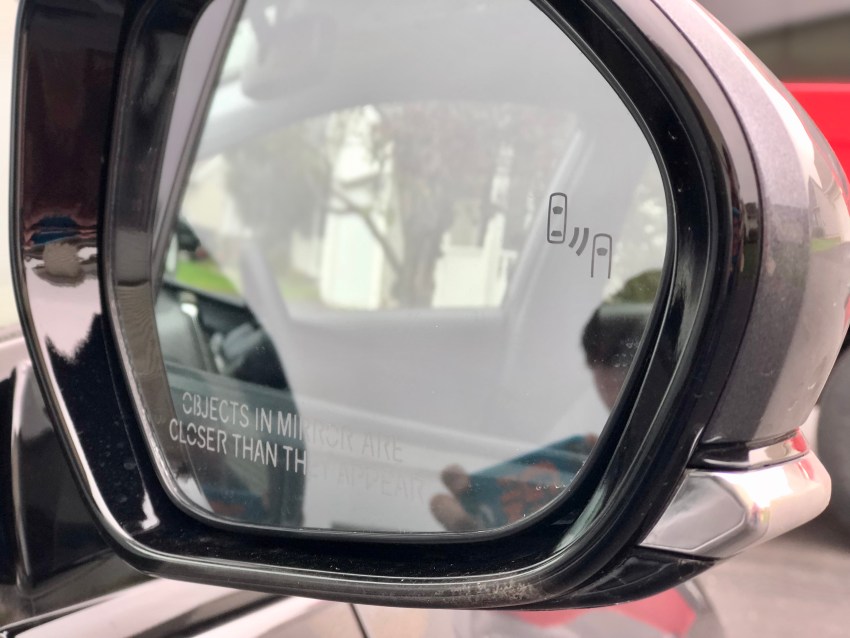 Bling Spot Monitoring, sometimes referred to as BLIS, include small indicators on or near the mirrors that light up when a vehicle is in your blind spot. According to the Insurance Institute for Highway Safety these systems can reduce lane change crashes by 14% and lane change crashes with injury by 23%.

This allows you to drive on the highway or on multi-lane streets with much more confidence. A Blind Spot Monitoring system isn’t just for large vehicles, it can help you know if there is a car in a blind spot created by poor interior visibility. These systems are available as an option in 57% of 2017 models and standard on 9% of models.

While traveling on the highway this is a feature you will love. Many manufacturers use these same sensors for Rear Cross Traffic Alert. This means that if you are in revers and plan to back out of a parking spot, you will get an alert if a car is coming from the side so that you can stop. Some systems will apply the brakes if you are backing out and rear cross traffic is detected, even if you don’t take action.

Look for a system that uses sensors and indicators, not cameras that require you to look at the in dash screen to see a lane. If you haul a trailer often, Ford is the only manufacturer with a trailer blind spot system. 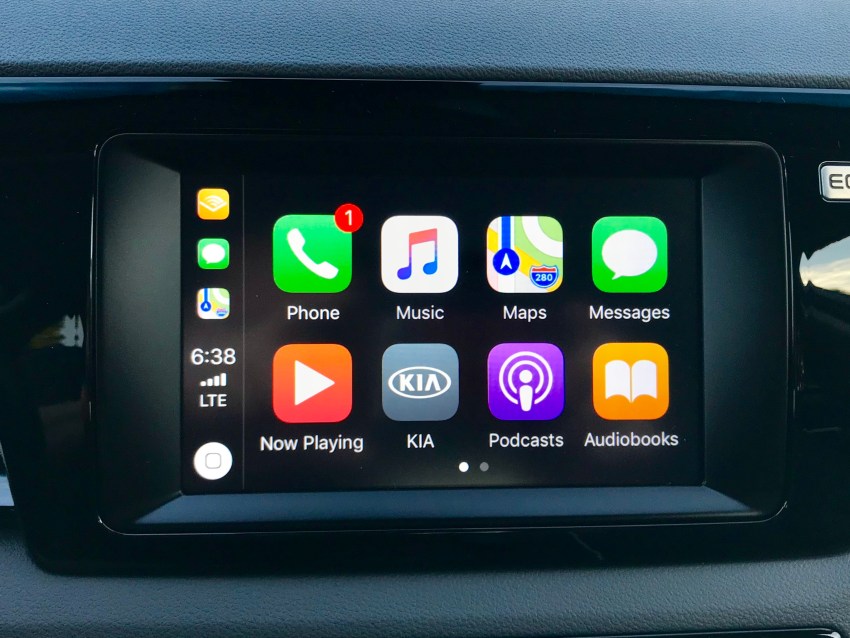 When it comes to technology in your car, you definitely want a car that supports Android Auto and Apple CarPlay.

These systems work in addition to whatever infotainment software the car manufacturer includes and it makes using apps, calls, navigation and voice controls much easier. In most cases, you need to plug your phone in, but there are a few models with wireless CarPlay.

Unlike many built-in navigation systems that require updates, CarPlay and Android Auto always offer the latest maps from Google or Apple. With Android Auto you can even use Waze to get the best routes based on traffic and get alerts when there is a police officer or a road hazard.

You can use apps like Google Music, Spotify, Apple Music, Audible and others to play your music on the touch screen and you can also use the Google Assistant or Siri for many controls.

Apple CarPlay and Android Auto are available on many 2017 and 2018 models from Chevy, BMW, For, Buick, Cadillac, Chrysler, Dodge, Ferrari, Fiat, Genesis, GMC, Honda, Hyundai, Jeep, Kia, Lincoln, Maserati, Mercedes-Benz, Mini, Mitsubishi, Nissan, Porsche, Subaru, VW, Vovlo and others. Check the specific year and model, as this will vary with some manufacturers.

You can also find it on some 2014, 2015 and 2016 models. There are aftermarket stereos that support CarPlay and Android Auto, but if you have a car with a built-in screen you may not be able to replace that system, so it’s important to look for cars with this feature already included. Toyota and Lexus are not supporting it at this time. Mazda is working on adding it to vehicles with Mazda Connect. 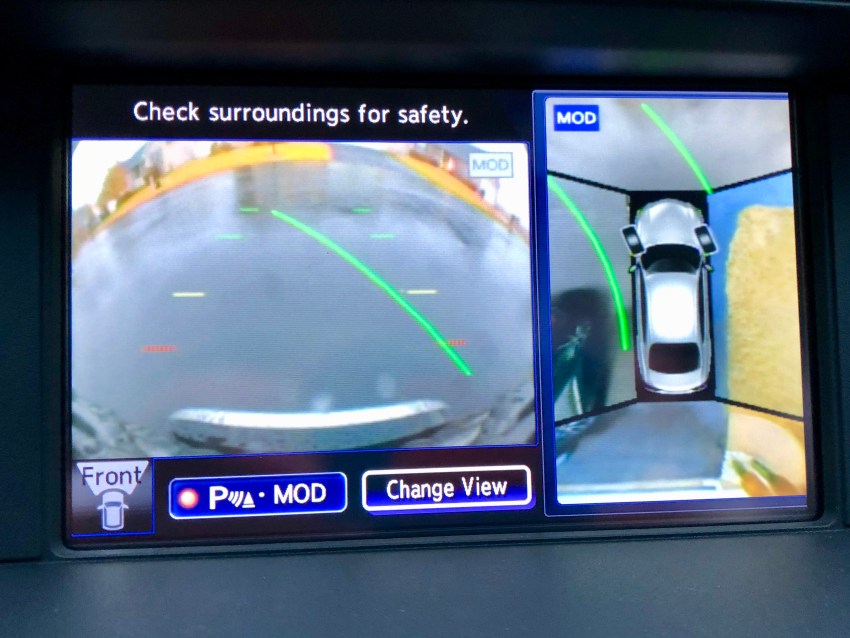 A backup camera is pretty standard by now, and it’s useful, but a 360 degree camera that gives you a bird’s eye view is way better. This feature uses four or more cameras to show you a top down look at your car so you can see your surroundings. It’s an awesome way to avoid bumping into the curb, a closely parked car or a power line while navigating a tight spot.

The IIHS reports that a rear view camera reduced back up crashes by 40% for drivers over 70 years old, and a 360 camera should provide even more help while backing out and navigating tight spaces.

On most of these systems you will see a top down view while backing up, but there is also often a camera button that you can touch to turn them on while slowly driving forward or while trying to see traffic when your view is obstructed.

This is still a upgrade on most cars, and it is often packaged in with other features into a convenience or technology package. 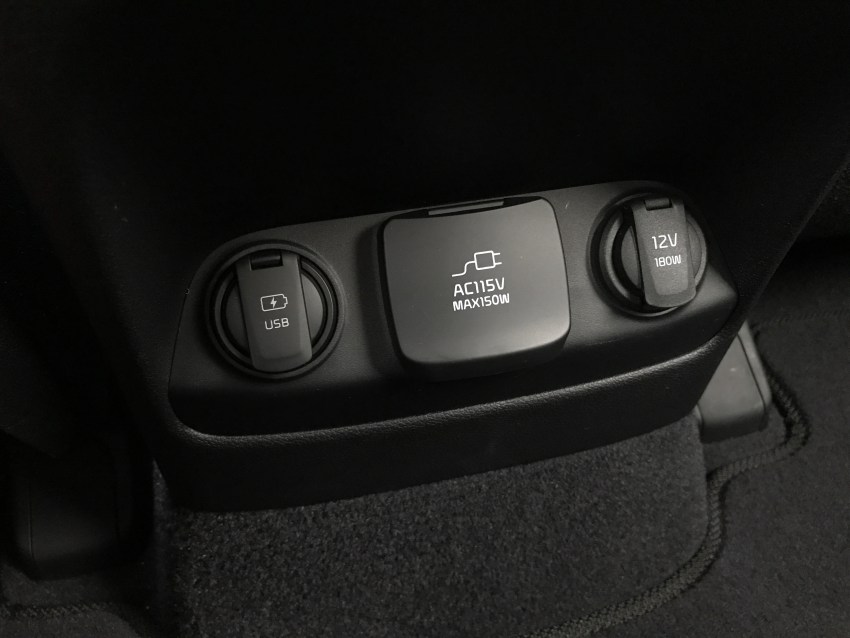 You want to make sure that your next car includes Bluetooth and USB connectivity for your phone. This is pretty much standard on most new cars, but if you are buying a used car, you should make sure this is included and that it works.

While these connections are very common up front, you want to look for power points that allow a front passenger to charge their phone as well. You also need to look in the backseat and or third row for connection points. The last thing you want is no way for adult passengers or for kids to charge up devices on a long trip. 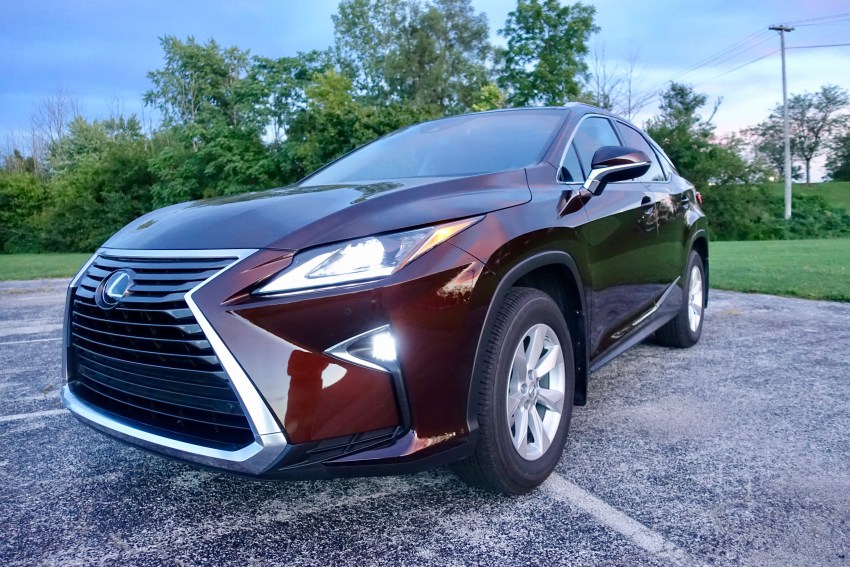 Adaptive headlights are amazing. When you turn the wheel to take a corner, the lights turn slightly to illuminate the road instead of shining off into the distance. On some vehicles there is a separate spot light that illuminates down towards the curb while turning.

The IIHS rates most headlights as poor, and when we sit behind the wheel of a car or truck we can quickly tell if they skimped on headlights. While great headlights aren’t always adaptive, we find that most smart headlight systems improve visibility and driver confidence. An IIHS study found that with adaptive headlights drivers saw targets 15 feet sooner with smart headlights and that there was not significantly more glare for oncoming traffic with these systems.

We also see intelligent high beams that automatically turn on when needed and off when other drivers are approaching. Some vehicles also include automatic leveling to keep the lights out of other driver’s eyes. 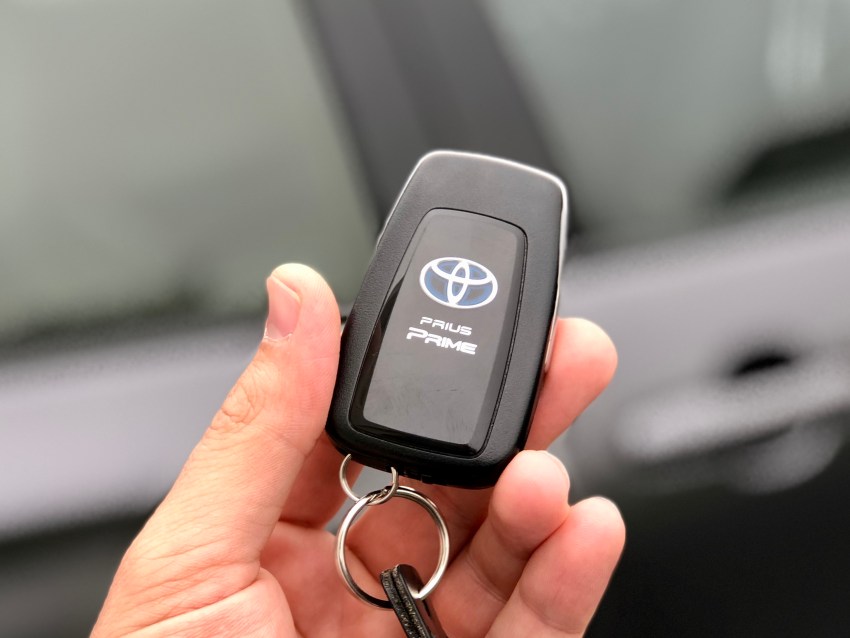 Keyless entry is nice, but leaving your key in your pocket while being able to lock, unlock and start your car is even better.

With intelligent key systems you can keep your key in a pocket or in your purse and simply grab the handle or push a small button on the door handle to unlock the car. There is also a button or a second press to lock the car door when you leave.

Once you are inside the car, you can push a button to start the car. The same button stops the car and the key is in your pocket the whole time. The system is incredibly convenient and when we have to use a car without it, the need for this option is even more clear.

You will find this on most new cars and trucks, though you may need to be above a base level trim with some options. Chevy does not yet offer this on the Silverado, despite most competing trucks offering the feature. 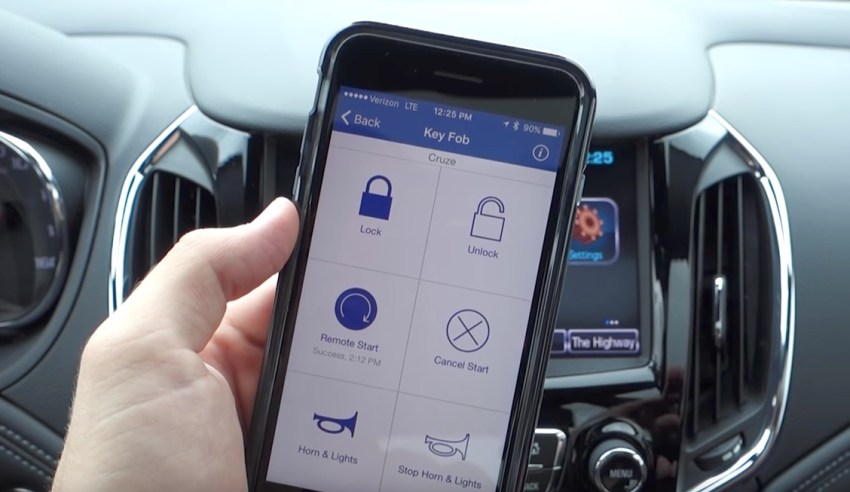 We’re starting to see more and more cars, trucks and vans come with a WiFi hotspot built-in. At first this sounds like something you don’t need since you have a smartphone, but it offers a lot of cool features. This feature works best with a 4G LTE hotspot, and you will want to check the signal strength in your area.

First off, this can allow you to connect laptops and iPads to the Internet using the car instead of using the phone of someone in the car. A built-in wifi hotspot also uses n antenna that is run through the vehicle, and often holds a signal better than your phone. If you are on a work site, it can also allow you to connect from the bed of a truck or nearby without using your phone.

Another great feature that comes along with this is the ability to remotely control your car from your phone. This includes locking, unlocking and even remote starting your car. You can also sometimes control temperature, see your remaining fuel and other features. It’s incredibly handy. 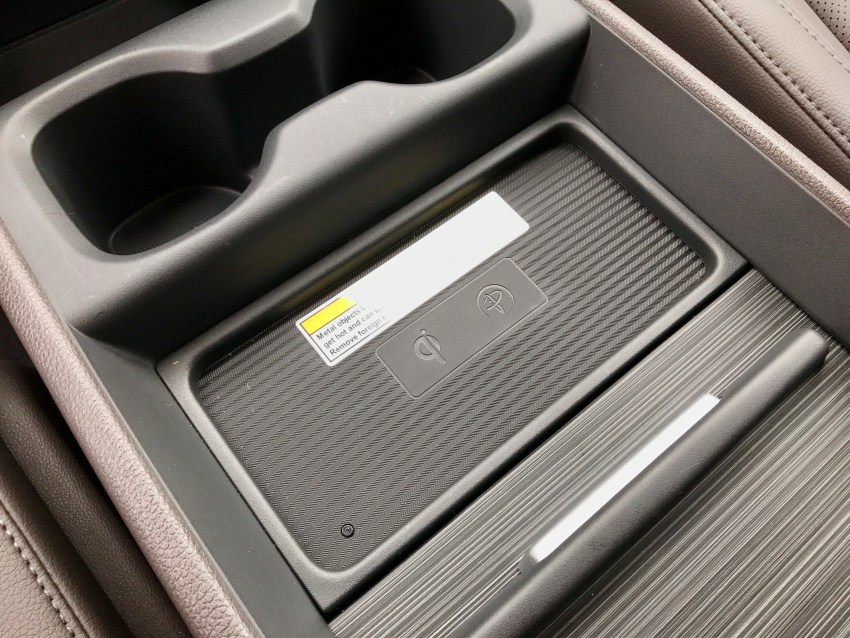 Many new smartphones include the ability to wirelessly charge when you put the on a special charger. We are seeing many cars include wireless charging pads built-in so you don’t need a wire cluttering up your center console to keep your phone charged up.

The iPhone 8, iPhone 8 Plus, iPhone X and many Samsung and other Android phones support this charging, and with it you can easily charge your phone while using Bluetooth.

We are seeing wireless charging built-in on Honda, Chevy, Toyota and many other models. This is a great feature to have on your next car if you own, or plan to own a phone that supports wireless charging. One downside is that you can’t use this while using CarPlay or Android Auto. 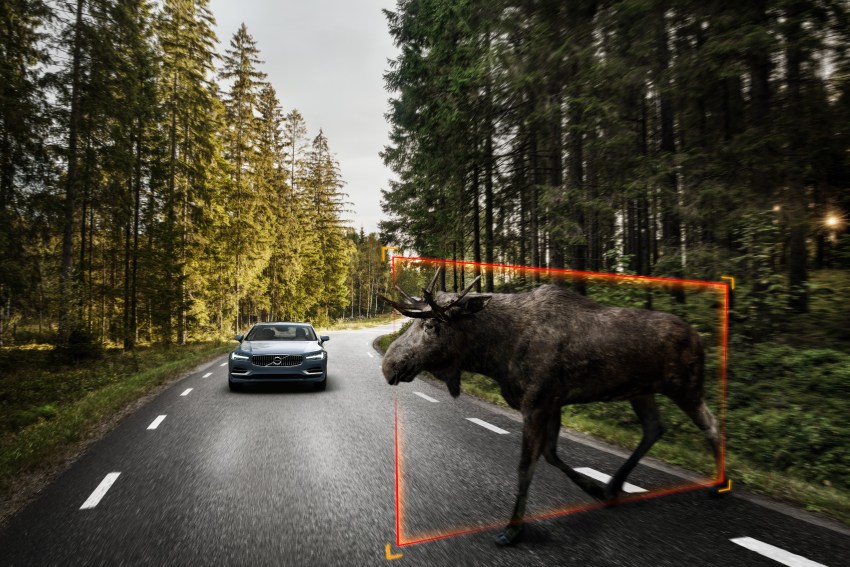 We love car features that keep us safer and automatic braking is one of those features. It’s not as exciting as most of the options on this list, but when someone slams on their brakes in front of you or cuts you off and your car comes to a stop automatically it’s thrilling.

There are many models including some that support pedestrian detection and others that include large animal detection.

You Need These 10 Must Have Car Features: Find Out Why